Role: I was the sole UX researcher and UI/UX designer for the fictional CityPups brand.

Introduction/Problem: Residents of highly urban cities have unique requirements for their dog adoption searches. Some of the constraints include “itty-bitty living space,” aka small apartments, use of public transportation, limited access to outdoor spaces, and frequently being in crowds of people. It’s important that, when searching for potential pup candidates, the potential adopter can easily locate information about how a dog would meet these requirements. I undertook a five-day modified Google Ventures Design Sprint, detailed below.

I focused my efforts on understanding the problem, reviewing the available research, and mapping potential end-to-end user experiences. From the research and the stated goals, I devised a problem statement:

The research surfaced several pain points, including an inability to locate dogs that matched user criteria specified to urban living, a lack of relevant information on dogs being considered in an urban setting, and a lack of trust/credibility in the system.

In my possible solutions, I wanted to:

I mapped out a few potential user experiences.

Day two began with lightning demos for inspiration. I selected CarMax, Petfinder, and Compassion International as my three primary lightning demos. I suspected that CarMax’s handy comparison feature would be useful in searching for a dog to adopt. CarMax allows the user to compare up to four vehicles without logging in or creating an account. Petfinder is perhaps the largest existing aggregator of adoptable dogs, so I chose to reference it to see what their current experience is like, having used it in the past. The adopter profile inspired part of my solution. Finally, I chose Compassion International, which is a nonprofit focused on sponsoring children, for its emotional plea to users. 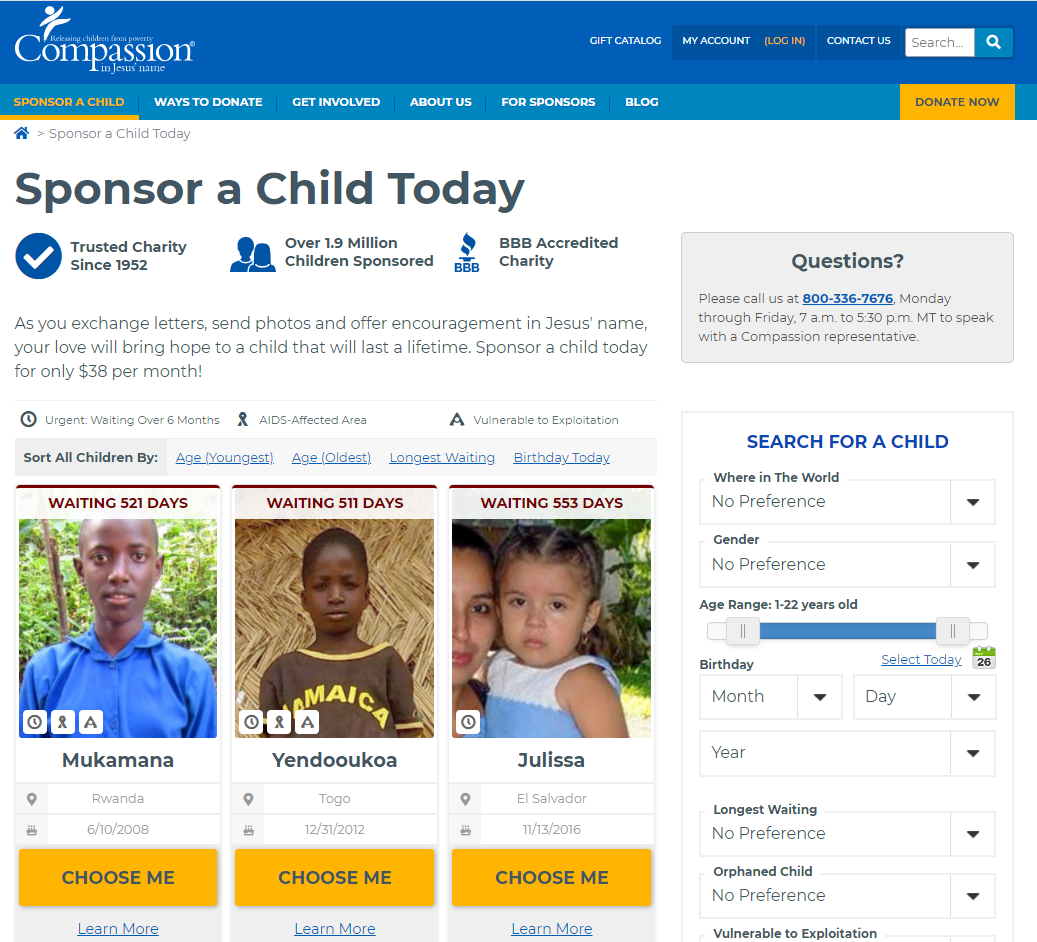 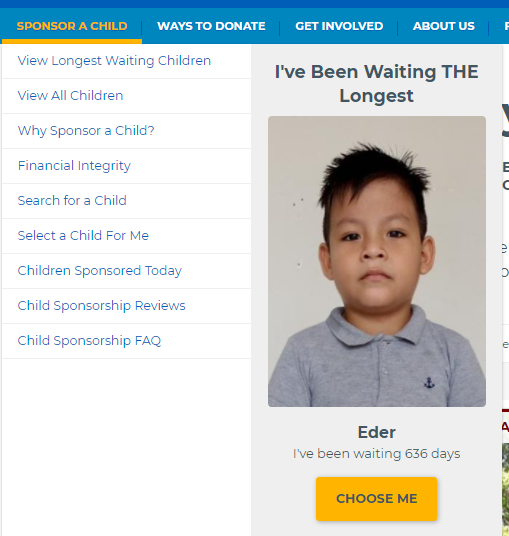 I began sketching solutions with a Crazy Eights exercise, then selected the adopter profile screen as my critical screen as it addressed the most crucial user pain points. 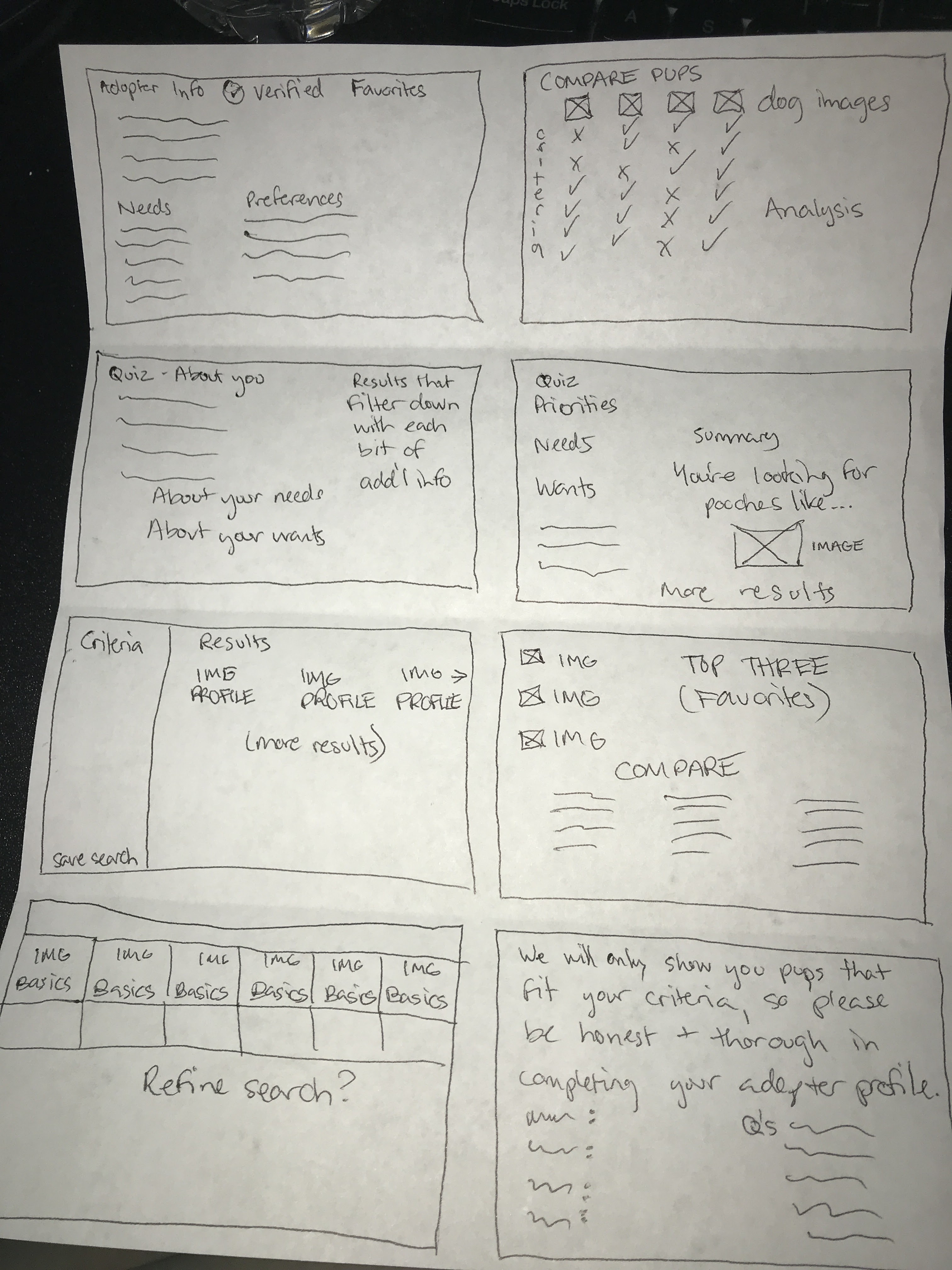 On day three, I storyboarded a more thorough version of the solution.

On day four, I created and iterated on a prototype in Figma. Elements I focused on to address pain points surfaced in the research included:

Here’s a glimpse at the first iteration of the home page and part of the adopter profile form. 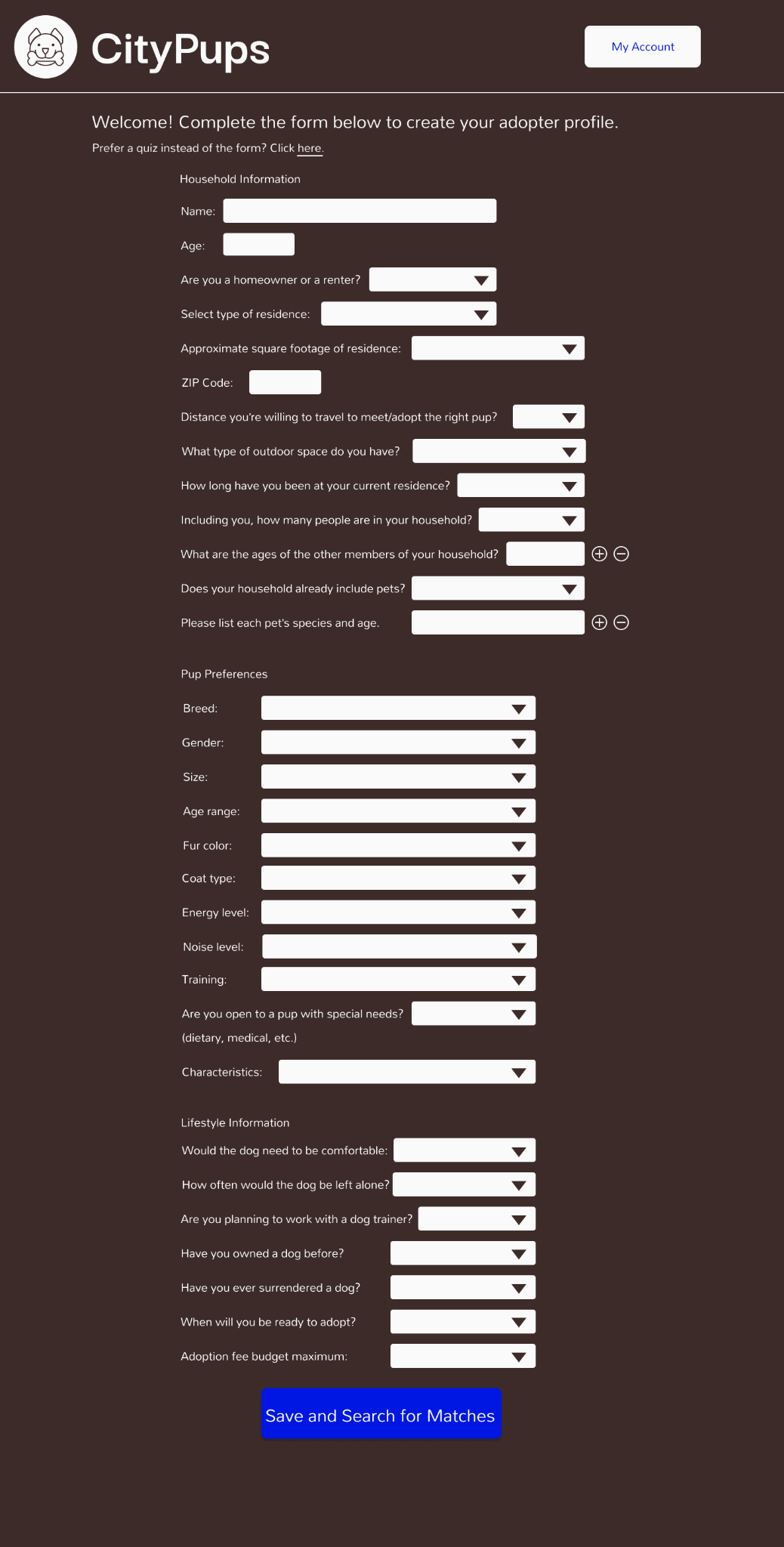 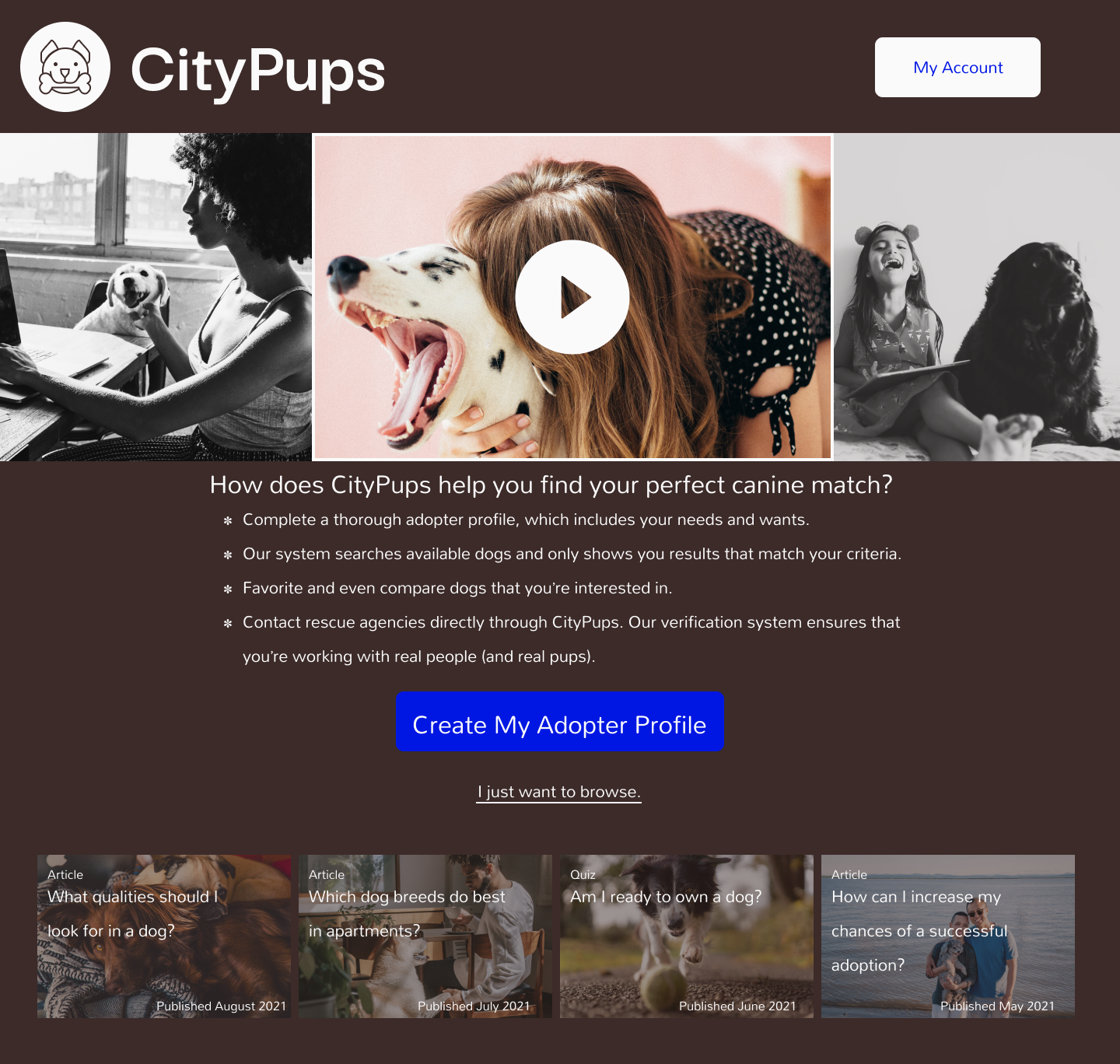 The first iteration of the form included a lot of dropdowns, which were quick and easy to prototype, but not user-friendly. I replaced a number of the dropdowns with other options in the next iteration.

Here are the iterations of the home page and the adopter profile form employed during usability testing.

During day five, I conducted remote usability tests via Zoom with five users. My primary goals were to learn:

I gave all users the same scenario: They were residents of NYC interested in adopting a dog, and they had used the CityPups site before. They were returning to the site to check out new features they were informed of via email.

Users liked the home page, especially the video, which they understood would show them a summary of the new features. They preferred the video to reading about new features. Users easily located and followed the CTA to create their adopter profiles.

Users were impressed, but not overwhelmed by the thoroughness of the adopter profile form. Three users didn’t like the dropdown fields, stating that they would prefer to see all the options at once.

All users easily navigated the search results page and the contact features. All users reported that they understood the next steps in the message that they received after they contacted the rescue agency. They liked the clarity of the message and knowing what to expect. One user suggested including the same information in the automated email that the message mentioned, so that they wouldn’t need to retain the information by memory.

Users had varied responses as to which next step they would take if they received no matches. Two said they would choose the option to analyze their adopter profile to see if there were compromises they might be willing to make to get matches. Two said they would probably set an alert to receive notifications in the event 100% matches were added in the future, specifically because they wouldn’t want to compromise on any of their prior responses. One said that they would use the view partial matches option, because they felt it was the easiest way to see dogs that might be available.

Though the modified sprint was complete, I spent a few more hours cleaning up the UI, particularly improving the functionality of the form so that it was more user-friendly, eliminating all but one dropdown. Here are the further iterated screens in the prototype. 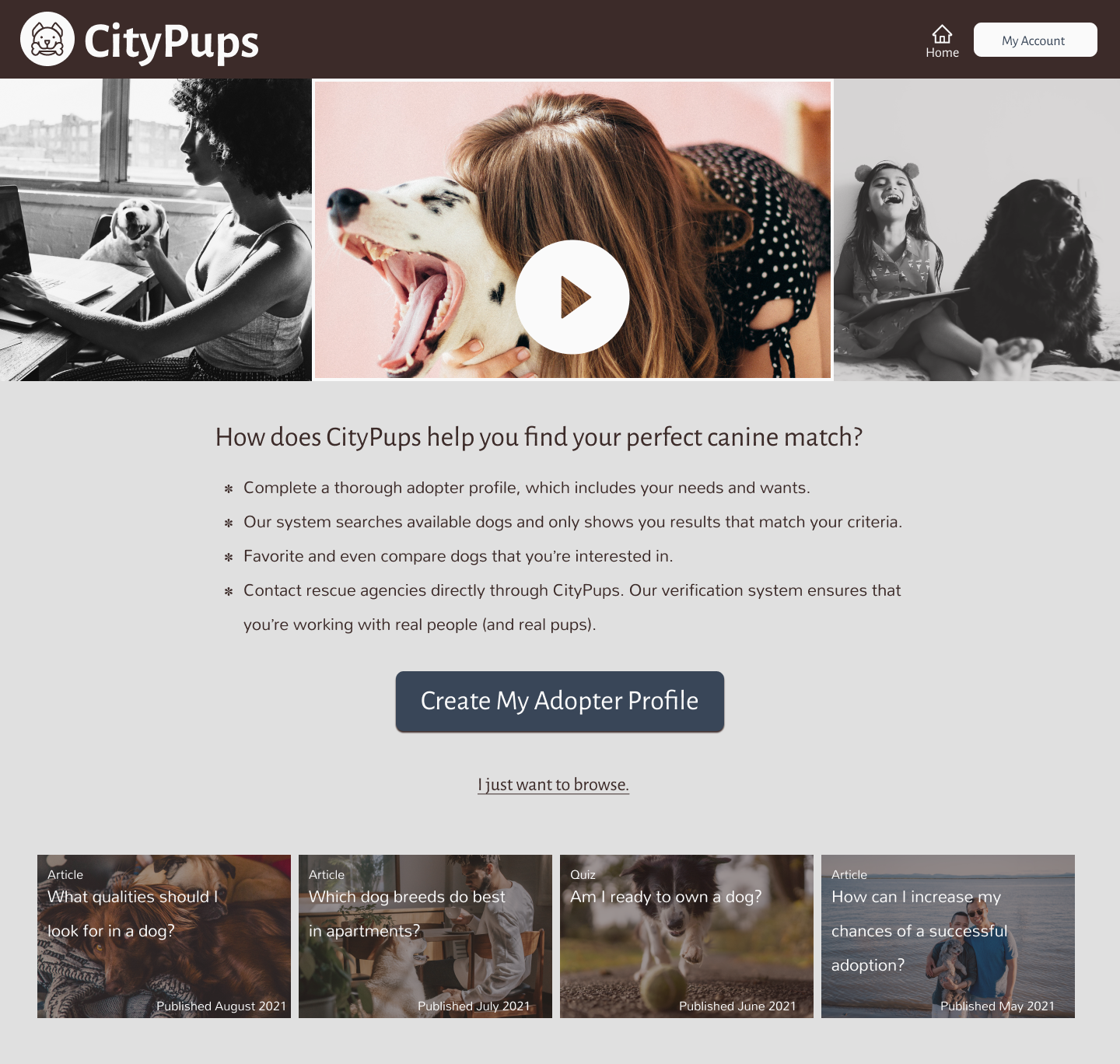 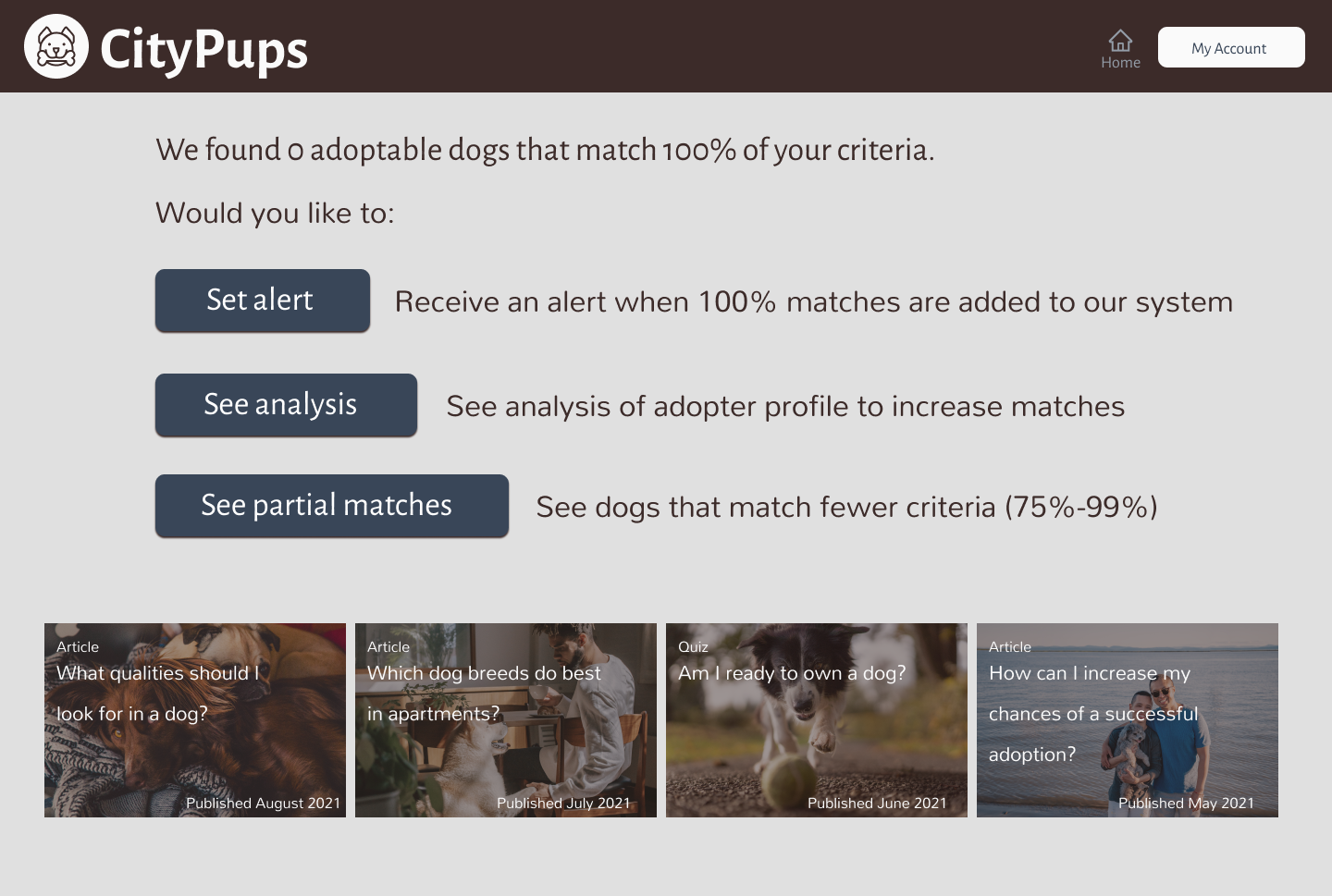